:: Lewis and Clark in Idaho Site ::
“We are a people in motion, whether on the Trail of Tears, Route 66 or the Interstate System. From Jack Kerouac to Willie Nelson, the lure of the road and the promise of the journey still hold us. And it was Lewis and Clark who gave us our first great national road story.”
—from “Why Lewis and Clark Matter” by James P. Ronda, Smithsonianmagazine, August 2003
Many web sites on the history and mythology of the old west look like they were designed by The Apple Dumpling Gang. These presentations are a clumsy mix of brochure-ware and armchair-historian long copy that recalls the achingly tedious history textbooks many of us slept through in Junior High.
The Lewis and Clark Expedition, being the old west’s answer to Homer’sOdyssey, has been prone to this sort of neglect-by-design. While numerous sites offer lots of information about various aspects and portions of the trail, most don’t revitalize the history while inviting people to take part in rediscovering the journey (with post-oughties web tech to boot).
The Idaho Travel Council and Idaho Historical Society decided it was time to bring the Idaho chapter of the Lewis and Clark journey to life. 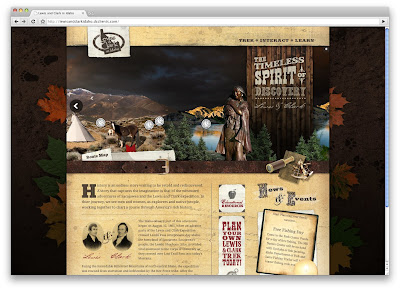 Drake Cooper created an re-vamped site with richer design and engaging interaction. Not only are there educational resources, native people history, interactive route maps, galleries, and Lewis and Clark journal excerpts, there are new ways to interact via taking your own trek and even, geocaching. 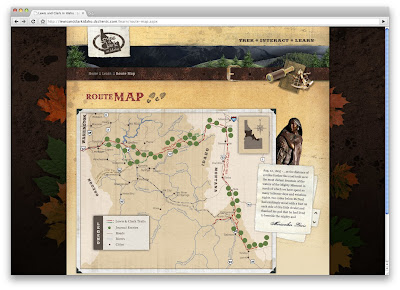 Visitors to Lewis and Clark in Idaho will learn that there was more to this journey than they once knew. They’ll see that it wasn’t just a story about two explorers and the legendary Sacagawea, but about many men, women, explorers, and native people on the cusp of a challenging, shared future.
“Lewis and Clark matter today because they act as a benchmark by which we can measure change and continuity in everything from the environment to relations between peoples. But more than that, their adventure reminds us that we are not the first Americans (native and newcomers alike) to face difficult choices in troubled times. William Clark, Sacagawea and Coboway lived in a complex, often violent age. The winds of change blew as hard then as now.