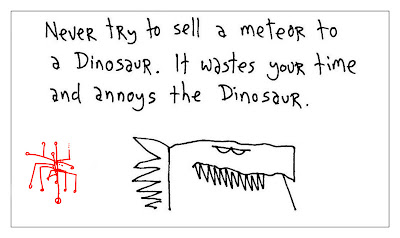 That illustration is from Hugh Macleod of Gaping Void; follow him on Twitter @gapingvoid for a daily 140-character dose of enlightenment.

I love this illustration. It makes me think of sending a non-newsworthy press release to a journalist. Not that journalists are dinosaurs…seriously, I’m not trying to be snarky, although you could probably do a lot of funny things with that analogy. Although, you can create even more funny and deprecating analogies for PR kids, so we’ll just let it go….

The point is – I believe that journalists have grown increasingly tired of getting pitched for quite some time. True, most value getting an informative, newsworthy, highly relevant lead. But – here’s the vicious cycle that’s developed that, I believe, makes journalists feel like they’re getting bombarded with ‘meteors’:

1. Every single business believes they deserve publicity. Thus, they demand it.

2. Every PR kid is willing to flush out hundreds of pitches and/or press releases to journalists, regardless of whether the information they’re shucking is, again, newsworthy or relevant to the journalist and said journalist’s readers/advertisers. (And don’t act like the advertisers don’t influence editorial…they do and they should. It’s called capitalism and it’s okay. Call me an idealist, but I believe objective reporting on hard news and capitalism-influenced features can someday find a fabulous balance in media.)

4. A good number of journalists ignore a vast majority of the pitches they receive. And rightly so – how on earth could they sift through all the ground noise?

I don’t believe that the result lies in writing better pitches or pitching more often – that just adds to the ground noise and exacerbates the problem.

Instead, I believe PR kids have to assess what exactly their role, strategy, and tactics should be for communicating with an organization’s publics.

The Internet, obviously, informs and changes a PR kid’s role, strategy, and tactics. It offers many different channels through which to communicate with many different publics.

Rightly so – but I believe it’s the PR kids’ responsibilities to:

1. Redefine their roles. PR needs to go ‘back to basics’ and consider all the ways they can communicate and engage with as many ‘publics’ as possible. And while online communication and community management is an obvious and exciting trend that I’m obsessed with right now, PR practitioners shouldn’t underestimate the value of a good time, in real time. Events offer people real experiences that they can Twitter about or post pictures of on Facebook, carrying positive momentum online. It’s a magical thing – and events are kickass.

2. Have patience with the shifting landscape. Redefining the role(s) of public relations is going to take time. I’m down with that though, because I think the result is going to be something closer to what ‘public relations’ intended.
“What is public relations?”
“Consider all of your company’s publics: their customers; their employees; their employees’ families; their shareholders; their potential customers; media who report on what they do/sell. Consider their needs, wants, values, passions, gripes, desires, and communicate with them. Engage them. Be a resource for all of those things.”

Public relations is a process and not a pitch, so having patience with the shifting roles should be inherent for the practitioner who really digs what he/she does.

3. Educate. At the end of the day, the direction from the C-Office might be “I want to see more pitches.” That’s something every PR kid faces.
On the one hand, you want to keep your job/respect the C-Office. On the other hand, you know that “another pitch” may not be the best use of your time. What to do?

a. Experiment with things like online community management.
b. Try to produce as many social media objects as possible and then practice social media optimization.
c. MEASURE THESE EFFORTS. Whether qualitatively or quantitatively – preferably both. Keep an eye on what works and what doesn’t; record what works and change what doesn’t.
d. Share qualitative and quantitative insights with what works with your client.
e. Suck it up and send out the relevant/newsworthy press release. But post it online too, and optimize it for search.
f. Come up with a event that showcases your client’s brand/service/image and will give the client’s public(s) a kickass good time. Plan it out in great detail and present it. If the client says “no,” that’s okay. Tuck it away and present it next time: someone will see the light and help you burn down the box.

I’d really like to hear from journalists and PR kids alike as to what they think about the (which I believe is outdated) PR role of “sell the message and get the press.”

Traditional PR may still be effective – but it’s certainly no longer enough to just pitch the day away.

“It wastes your time. And it annoys the dinosaur.”

Kount Rebranding Counterintelligence For both online and brick-and-mortar retailers, Fraud is a very real and present danger. The problem is…